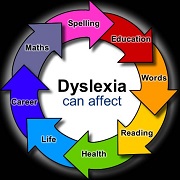 Welcome to the UK’s first independent on-line community for the Dyslexic Teenager, celebrating over 2.5 million hits from all over the UK and the world, making us one of the UK’s successful websites for Dyslexia.

Knowing and understanding Dyslexia is going to be the main topic of this article. We will also tackle some issues on how being dyslexic can affect an individual when it comes to his or her daily activities.

Dyslexia is a condition of the body where the person suffers from brain disorders. This type of cognitive disability can start as early as pre-school years, where certain learning disabilities are seen from the child. A person who is suffering from Dyslexia will often find difficulties especially in memory and words, which can be noticed from speaking and writing.

Dyslexia is often referred to as the reading disability wherein the brain is having difficulties processing and understanding the letter symbols. Furthermore, people who are dyslexic are not dumb or people who suffers from poor eyesight. In fact, studies have proven that being dyslexic has nothing to do with the level of intelligence of a person, nor the way his or her eyes processes what it sees.

What Are The Causes Of Dyslexia?

There is no direct evidence that will prove the real cause of dyslexia. Some say that this is inherited; however, this is yet to be proven by further studies. For now, we are all clueless on how dyslexia occurs. Let us just hope that soon, medical science will find a way to prevent it from happening, by avoiding certain risk factors that causes dyslexia.
What Are The Signs And Symptoms Of Dyslexia?

The signs and symptoms of dyslexia may differ from one person to another. Nonetheless, common symptoms are identified below:

• A child who is dyslexic may have delayed speech. Most often or not, children start to utter their first few words from 1 year old or younger. However, for children with dyslexia, they may start uttering their words from age two or older.

• Mixing of words and letters in the word while reading. For example: A person who is dyslexic may read the word “Aloha” as “Ahola.”

• Dyslexic people are reported to have ear problems and infections majority of the time.

• People who are dyslexic often confuse him from left and right hands/directions.

• People with dyslexia have difficulties in writing the alphabet in the correct order.

• People with dyslexia may suffer from remembering things, especially with names and words.

If you are noticing some symptoms of dyslexia to your child, immediately seek medical help, because most of the time, this condition can be treated as the child gets older. The condition is properly diagnosed using language and speech assessments. If proven to have dyslexia, treatments such as special teaching programs for dyslexic will be given.
It is important for parents to be aware of this condition, because being dyslexic can greatly interfere with the person’s life.

During the early stage, he won’t be able to understand his lessons in school very well, be bullied by classmates due to his inability to speak well, and worst is to not finish school. Give you child the chance of curing his/her dyslexia. It can be treated, especially when diagnosed and treated at an early stage.

Dyslexia-Net has been featured in and on

If you are in your last year of A-Levels or GNVQ, Dyslexia-Net is here to help you. In the next few weeks we are going to put the most comprehensive guide to how to apply for your DSA, where to go for all your needs, including how to go about getting computers for your studies. We will even help you with your UCAS form.
Don’t worry…it may sound pretty awful, but it is easy when you know how!.